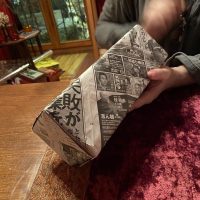 Walter says: To fit with the season, for this month we selected two daiginjo sake, from Sogen and Ichinikura. Daiginjo means that the rice is polished to just 40 percent of the initial grain, leaving only the inner part. This inner part is full of concentrated aromas that make the sake taste quite full, but at the same time very elegant.

And what could be more elegant than a Samurai Queen? Sogen Brewery is situated at the utmost tip of the Noto peninsula, at the same height as Tokio, but on the west coast. It used to be run by a Samurai family. Everything there is still done very much the traditional way, and contrary to larger, modern breweries, brewing only happens the classic way, in winter. The work is done by local fishermen and farmers, providing them with additional income during winter, and even the toji, the chief brewer, has no university degree! This form of coexistence used to be traditional in rural areas and can still be found in some parts of Japan.

Mangyo-san, a young fisherman and farmer who is responsible for sales at Sogen, also trained as a professional chef, and he told me how important it is for him to preserve this traditional life style. He also said that the next convenience store is half an hour’s drive away (unbelievable in Japan!) to explain the sense of isolation. Even more, during the winter the massive snow fall imposes a natural lockdown. He recommends the Samurai Queen as an aperitif as well as with starters such as grilled red mullet or steamed cod. And of course oysters! In general the local cuisine is quite salt driven, as the Summer’s vegetables, fish and seafood are salted and fermented for the winter. The Sogen sake are never particularly powerful in the nose, on purpose, as the sake is not supposed to cover the food’s taste, rather snuggle up to it. Due to the light bitterness in the finish it also helps to refresh the palate. Heinzelcheese says: Wow – what a beautiful nose! Discreet, yes, and elegant, and at the same time so intense, warm and yellow – I suddenly felt transported to the Gambia in West Africa, smelling the warm, dusty red earth, the Atlantic, the small, super ripe bananas… And that continued on the palate, dense, in warm yellow balsamic, with a mineral, salty undercurrent and that finish Walter describes as bitter, while with a wine I would have guessed skin contact and noted some tannin grip. Amazing concentration and opulence, but not at all overpowering, very quietly, firmly glowing from within.

Fortunately my good friend Serendipity had made me buy a piece of Remeker. At the origin of the Netherlands’ Van de Voort family‘s exceptional cheese once stood a gouda, but today it has as little in common with that cheese category as the Samurai Queen tastes like a sake from the next supermarket. All what I’ve been saying above about the Queen also applies to Remeker. Made from the rich raw milk of beautiful Jersey cows, after 12 months it shows a similarly quiet, joyful glowing and yellow opulence, is mellow in texture with an idea of crystals and not a hint of overpowering sweetness. The two of them positively meld into each other, “snuggle up to each other” – and I wish I could send a piece of the cheese to young Mangyo-san! Who knows, Serendipity might take care of that as well. Walter says: Our second December sake comes from the Ichi no Kura brewery, literally “united to one”, as the company emerged from four independent breweries that combined in the 1970s. Up to this day the four founding families take their turn for the top position. Ichi no Kura represents the wonderful sakes from the Tohoku region in the utmost northeast of Japan’s main island Honshu. It is particularly close to my heart because they started quite early to cultivate their own rice working as sustainably and organically as possible, using a minimum of pesticides. They’ve also been helping their farmers to do the same, so that frogs and insects are returning and collaboration as well as cooperation are not simple statements but at the heart of everyday life.

Kura no Hana means the brewery’s flower, and the sake carries the same name as the variety of rice used, a relatively new crossing from the province of Miyagi. From this new rice, using traditional artisanal techniques, the toyis, the chief brewers nurtured a very delicate, tender flower which thanks to the acidity does not taste just sweet and mellow, but very balanced. In contrast to many other daiginjo sakes even the second glass of Kura no Hana does not turn boring or overly sweet. That is the result of love and craftsmanship. I like it with a scallop carpaccio or very tender, white chicken. Heinzelcheese says: The finest sweet melon rises from the glass, very round and literally polished (I finally learnt to interpret this as a signature nose of daiginjo sake), and that continues on the palate, with an equally fine, pleasant sweetness, turning into an idea of white chocolate and blancmange, very soft and light, discreetly carried by the alcohol – as white and bright as the first, fresh snow on a winter night and at the same time as caringly enveloping as the warm lactic air of a creamery and the touch of sheep’s milk ricotta still warm on the tongue… Therefore, once again: wow.

And once again, Serendipity had it all sorted out, because amongst the cheeses for the tasting lab there was: Aurélie. Another exceptional cheese, this time from Limburg in Belgium and goat’s milk, but like the Remeker made from raw milk using artisanal methods, at Kaasmakerij Karditsel. Its texture as delicate and melting as the brewery’s flower, the savoury milk a perfect pairing with the fruit and sweetness in the glass; a tremendously elegant couple, fit for any festivities.